Mary Anne Koda-Kimble, PharmD, dean of the UCSF School of Pharmacy was honored by the American Pharmacists Association-Academy of Student Pharmacists (APhA-ASP) with the 2008 Outstanding Dean Award for significant support of APhA-ASP and her commitment to student welfare. At the awards ceremony, Koda-Kimble was described as a a servant leader, an advocate for professional development, and a dean who does not let any barrier impede a student’s dream or idea. "Students with purpose and passion inspire me to clear the way for their work, and to find the time and resources that will help them reach their full potential, said Koda-Kimble at the awards ceremony. "I am very proud to receive this award…I am watching you (student pharmacists) closely and will try to follow your lead, for your success in enhancing health care for all is my purpose and my passion."

Koda-Kimble has served as pharmacy school dean at UCSF since 1998 after earning a PharmD degree from UCSF and subsequently joining the School’s faculty as a practitioner, teacher, dean of students, then chair of the department of clinical pharmacy. She holds the Thomas J. Long Endowed Chair in Community Pharmacy Practice. In 2000 she became one of nine pharmacists elected to the Institute of Medicine for her major contributions to health and medicine. She has been a national leader in pharmacy throughout her career, as demonstrated by her presidency of the American Association of Colleges of Pharmacy. She is frequently invited to address national and international groups on topics ranging from over-the-counter medications to emerging issues in pharmacy and education. In addition , she has many publications, the best known of which is Applied Therapeutics, a text widely used by health professional students and practitioners throughout the world.

Day has served as an advocate, advisor, and role model for all student pharmacists—particularly those involved in the APhA Academy of Student Pharmacists (APhA-ASP)—for more than 40 years. He has been an activist for patients and the rights of pharmacists to care for them. Throughout his career, he has consistently encouraged students to attend society meetings and to participate in debates as full-fledged professional partners. He has instilled in students a passion for creating professional change.

The hours Yokoyama devotes to professional service at the national and state levels reflect his dedication to pharmacy and its continued development. He is currently the treasurer of the APhA Foundation. He has served as president of the California Pharmacists Association (CPhA), the CPhA Foundation, the California Society of Health-System Pharmacists (CSHP), and the California State Board of Pharmacy. He is a CSHP fellow.

UCSF chapter of APhA-ASP receives Chapter of the Year Award

The UCSF chapter of the American Pharmacists Association-Academy of Student Pharmacists (APhA-ASP) received the Chapter of the Year Award for achievement during the 2006-2007 academic year. Co-presidents that year were Curt Allday and Luke Tso who organized chapter activities under the theme "Expect the Unexpected." "What a fantastic tribute to our students," said Mary Anne Koda Kimble, PharmD, dean of the UCSF School of Pharmacy. "This award recognizes their drive and commitment to the profession and their dedication to patient care. As important it signals that our students will be leaders upon graduation and agents of change. Congratulations!" The UCSF chapter won the award previously in 2000, the year the award was initiated. 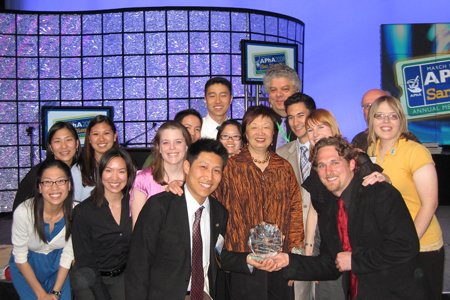