Koda-Kimble, who is a leader in the innovation and continual advancement of pharmacy education and practice, was among a growing group of pioneers who changed the practice from one of dispensing to one that took responsibility for the overall safe and effective use of medications and the direct pharmaceutical care of patients. To teach the concept in the classroom, Koda-Kimble and Lloyd Young, PharmD, led the development of the first pharmacy school textbook on clinical therapeutics, which was first printed in 1975.

Koda-Kimble is a 1969 alumnus of the UCSF School of Pharmacy and has been a member of the faculty since 1970.

UCSF School of Pharmacy Dean Mary Anne Koda-Kimble, PharmD, was awarded the 2010 Remington Honor Medal during the March 13, 2010, opening general session of the American Pharmacists Association (APhA) annual meeting, held at the Walter E. Washington Convention Center in Washington, DC. She delivered acceptance remarks via video and received the medal in person in front of the APhA membership. 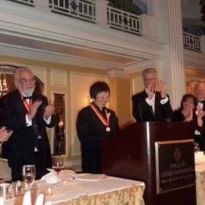 Koda-Kimble was formally honored as the 2010 Remington Honor Medal recipient during a dinner on March 14, 2010, at the Willard Intercontinental Hotel in Washington, DC. Master of ceremonies for the evening was former Remington honoree and UCSF School of Pharmacy alumnus Robert Gibson, PharmD. Koda-Kimble delivered her remarks, entitled Wild Gardner, to a ballroom full of invited professional colleagues, family, and friends. A dessert reception followed. UCSF student pharmacists honored their dean in a video shown during the reception.