Can a retrofitted bathroom scale costing less than $100 save lives and improve the health of millions of Americans living with heart failure while cutting billions of dollars in annual health care spending?

A team led by Mozziyar Etemadi, MS, has been awarded $110,000 to find out. Etemadi is an MD/PhD student in the UCSF Medical Scientist Training Program through which he is pursuing a PhD in the UCSF/UCB Joint Graduate Group in Bioengineering and working in the lab of School of Pharmacy faculty member Shuvo Roy, PhD.

The project is one of three national winners, taking second place in the 2012 Prize for Primary Healthcare awarded by the Boston-based Center for Integration of Medicine and Innovative Technology (CIMIT) and funded by the Gelfand Family Charitable Trust.

In heart failure, a heart damaged by disease, hypertension, infection, or heart attack does not pump enough blood. Unless treated, this results in fluid retention as blood backs up into the veins and lungs, leading to difficulty breathing, crippling fatigue, swelling, and other symptoms. 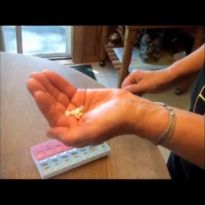 Heart failure is the leading cause of hospitalization for people over age 65 and the top cause of hospital readmissions. It accounts for about $40 billion in annual U.S. health care spending.

The problem, as Etemadi and his team define it, is that current treatment is primarily reactive, waiting for a patient on a given drug regimen to note significantly worsening symptoms, contact their physician, and adjust their medications. But by then, conditions often require hospitalization to treat, and such crises can turn fatal.

A better approach would be to catch pre-symptomatic declines in heart function days or even weeks beforehand and make proactive drug adjustments.

That solution starts with an everyday phenomenon, says Etemadi.

If you stand on an older-style bathroom scale, the kind with a needle that indicates your weight, you will see the needle wiggle slightly with each of your heartbeats. The wiggle actually reflects the body’s recoil from the force of the heart firing off another volley of life-sustaining blood.

In several publications and numerous small-scale trials conducted while earning his engineering degrees at Stanford University, Etemadi and co-authors have shown that by modifying the electronics inside a common digital scale they can reliably measure those wiggle-causing body vibrations—which they have dubbed the Cardiac Pulse Signal—and use them to accurately determine how much blood the heart pumps with each beat.

Using the award funding, Etemadi and his collaborators are building prototypes of the modified scales that measure a patient’s heart function. After encrypting that data for privacy, the devices wirelessly transmit it to a nearby cell phone, and then to remote data storage (what techies dub “the cloud”). Once there, it can be accessed online and assessed by the patient’s primary care physician.

In this way, medications could be adjusted before a crisis, and heart failure patients could be empowered to routinely check their cardiac output just as most already use their scales daily to check for fluid-retention weight gain.

The next step, later this year, will be a feasibility study that recruits patients hospitalized at UCSF Medical Center due to heart failure. The study will operate in reverse, checking that the scales are sensitive enough to detect changes in cardiac function as these treated patients improve rather than deteriorate. Patients will then be given the scales to take home for a month after their discharge to ensure that wireless communications work smoothly and that physicians receive data they can readily interpret.

Assuming the modified scales reliably detect clinically relevant changes in heart function, a randomized controlled trial will be conducted next year to compare hundreds of patients using the devices with those using the current approach of reporting noticeable symptom changes to their physicians.

In naming Etemadi one of its 2011 “30 under age 30” rising stars of science, Forbes cited another remote medical monitoring project he is collaborating on—a diaphragm that detects early signs of pre-term labor in high-risk pregnancies and wirelessly alerts physicians via a similar cloud database.

New clues in the hunt for Alzheimer’s therapies
Tue Jun 21, 2022
PharmD Class of 2022 celebrates graduation in person
Tue Jun 7, 2022
Jennifer La selected as 2022 Bowl of Hygeia winner
Tue Jun 7, 2022
END_OF_DOCUMENT_TOKEN_TO_BE_REPLACED
Make a gift
Science is the foun­da­tion of the School of Pharmacy’s pi­o­neer­ing re­search, in­di­vid­ua­lized pa­tient care, and un­par­al­leled PharmD and PhD ed­u­ca­tion pro­grams.
© 2002–2022 The Regents of the University of California