Some people see a future populated by billions of mechanical micromachines, robots no bigger than a speck of dust that are programmed to do our bidding. UCSF School of Pharmacy researcher Christopher Voigt, PhD sees a different future. He sees living micromachines that can be engineered into a new kind of pharmaceutical. His micromachines are bacteria.

By understanding how all the components of bacteria work together, he is taking the bacteria's microbial machinery apart and putting it back together in new combinations.

In collaboration with scientists at the United States Department of Energy's Lawrence Berkeley National Laboratory, Voigt is making bacteria that are modified genetically to perform a variety of jobs. "They might be called upon to clean up toxic chemicals or to seek out and attack cancer cells," Voigt says.

Voigt's work is one of the many applications of a field called systems biology.

Systems biology and its potential

The potential applications of systems biology are so great, experts say, that the buzz about the field is well-deserved. "The reason that systems biology is so hot right now is that it's a turning point," says UCSF School of Pharmacy researcher Ken Dill, PhD. "This is a new era, one in which biology is moving more towards engineering."

"As we in the pharmacy school apply the systems approach even more broadly," says School of Pharmacy Dean Mary Anne Koda-Kimble, PharmD, "we will be able to see and understand the complex relationships among science, education, and patient care."

The major difference between traditional biology and systems biology, Dill says, is that the former peers at individual components of an organism. Systems biology looks at how those pieces all work together.

For example, Dill explains, "You could study each part of a Boeing 777 aircraft and describe how it functions, but that still wouldn't tell you how the airplane flies."

The rise of the field of systems biology could be viewed as a reaction to new technologies that allow scientists to hone in on specifics. These technologies include automated gene sequencing and microarray assays that scan cells for thousands of individual genes or proteins.

Just as we need to know the specifics, explains Dill, we need new types of complex models in biology, particularly the kinds of models that engineers use. These are models that can predict behaviors in advance of experimental observations, he adds. "Everything changed in the last 5 years," Voigt says. "We are now able to perturb a cell and monitor how it responds on a large scale of measures." In short, researchers are able to start looking at all the responses of the whole cell, the whole system, rather than the response of one part.

As with the engineers who put together Dill's 777 aircraft, the scientists who study whole biological systems need to deal with vast quantities of information. Not surprisingly, the systems approach to biology requires large amounts of data and the capability to process and analyze that data. 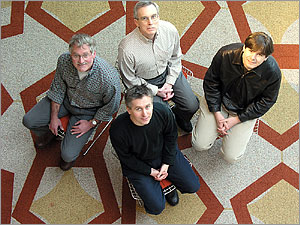 Three ways to look at systems

There are three very different ways of studying biological systems, the:

In the bottom-up approach, scientists first find information about all the components of a system. Then they try to combine that information into a complete picture.

When finished, such a detailed model should be capable of describing exactly how the system works under any circumstance. "What we would like to do is be able to describe how a single gene behaves in the same detail that physicists can now describe exactly how hydrogen atoms behave in a gas," Voigt says.

Such complete, accurate descriptions of biological systems will change the nature of biology, scientists say. When biological systems are perfectly modeled they become like machines. They can be taken apart and put back together in new and interesting ways. In short, they can be engineered.

Andrej Sali, PhD is another UCSF School of Pharmacy scientist who is applying the ideas of systems biology. He uses computer models to predict how strings of amino acids fold into proteins, which are the functional machinery of cells.

He has already created a computer simulation of how all the proteins created by yeast are folded. He is currently modeling all the more than half a million proteins that are identifiably related to one structure in the cell. Such models can provide powerful insights into how cells function and how they go awry in diseases.

Top-down models are the basis of computer games like The Sims, in which individual players in the simulation are given rules of behavior and then allowed to interact freely with each other.

"The theory of complex systems says that the rules by which parts of the system go may be more important than a description of the parts," say UCSF School of Pharmacy researcher Anthony Hunt, PhD. The system also is able to adopt behaviors that may not have been foreseen by looking at the individual players, he adds.

Hunt, who uses the middle-out approach to study liver chemistry, notes the activity of a liver cell varies greatly depending on its interactions with the cells around it. "Liver function can't be understood simply by studying liver cells in the lab," Hunt says. "That would be like trying to understand the legal system by observing a lawyer in an empty room."

The solution to this quandary is to make a virtual model of cell behavior on the computer. Hypothetical rules of cell behavior are formulated from what we know about liver cells. This model is then refined as it is tested against the reality of the system's behavior as seen in experiments, Hunt explains.

The advantage of this approach, Hunt says, is that scientists do not have to study and define the behavior of each cell individually. This would be impossible. "A truly complex system simply cannot be understood through a reductionist approach," he says. "A complete description of the system is simply too big for us to hold in our heads."

Hunt sees many advantages to this method for pharmaceutical development. "The pharmaceutical industry is slowed down by the fact that it has an ocean of potential compounds and therapeutic targets it can go after," he says. "A good model would allow the industry to eliminate most of these therapeutic candidates and focus on those with real promise."

The ability to model complex adaptive systems has practical and philosophical applications far beyond biology.

Koda-Kimble notes that the modern world overloads us with information. Reductionist attempts to organize that information can be comforting, but may not be realistic. "Institutions draw up elaborate organization charts to describe how information flows, but we all know that organizations don't really work that way," she says.

In medical research and health care it may be more useful to accept that we are working with systems that have an irreducible complexity, Koda-Kimble says. "We can't really prescribe exactly how things are going to work. The key is to have a dynamic system that lets bright people have access to a free flow of information across fields. They will come up with new ideas and new ways to do things."

New clues in the hunt for Alzheimer’s therapies
Tue Jun 21, 2022
PharmD Class of 2022 celebrates graduation in person
Tue Jun 7, 2022
Jennifer La selected as 2022 Bowl of Hygeia winner
Tue Jun 7, 2022
END_OF_DOCUMENT_TOKEN_TO_BE_REPLACED
Make a gift
Science is the foun­da­tion of the School of Pharmacy’s pi­o­neer­ing re­search, in­di­vid­ua­lized pa­tient care, and un­par­al­leled PharmD and PhD ed­u­ca­tion pro­grams.
© 2002–2022 The Regents of the University of California