It can take just the flick of a genetic switch for breast cells to kick-start the normally well-regulated process of growth seen in puberty, pregnancy, or the menstrual cycle—or the mutation of that switch to initiate the unchecked proliferation of cancer.

What happens next depends on whether their cellular neighbors follow their lead, ignore, or exile them. That’s because tissues are not mere collections of identical cells but rather communities working together to carry out tasks.

So, under what conditions will breast cells respond to their fellow tissue-citizens urging them to grow their gland’s capacity—or inciting them to run amok in a cancerous riot?

According to a new study led by Jennifer Liu, BS, and Zev Gartner, PhD, under certain conditions, cells primed for growth are more likely to lead to changes in tissue structure (and produce bigger structural changes) when adjacent cells are less growth-activated, as opposed to when they are amidst similarly primed cells.

“Depending on how you put together this community of cells, you can get very counterintuitive behaviors,” says Gartner, a faculty member in the UCSF School of Pharmacy’s Department of Pharmaceutical Chemistry.

“What we’re doing is manipulating a gene, or a growth-regulating protein expressed by that gene, in a way that doesn’t give cancerous behavior,” he says. “But if you take that same cell and you change the context or the community that cell interacts with, now suddenly it does behave like cancer in that it invades, trying to leave the tissue or dragging the tissue with it.”

The challenge: Monitoring cells in tissues that are just taking shape

The Gartner lab’s research, published online on October 4, 2012 in Cell Reports, is among the first to look at the effect on tissues of different proportions of growth-activated cells early in the process of structural development, growth, and remodeling (morphogenesis), which mammary glands undergo routinely.

“Most people would think that starting growth by activating an oncogene [a mutant form of a gene involved in cell growth that can cause cancer] in all the cells of a tissue is the worst thing you can do,” says Gartner.

“What we’re showing here is that, in the context of growing tissue, activating an oncogene in just one of those cells, even at a relatively low level (reflecting normal cell-to-cell variation), produces behaviors that look like invasion, cell dissemination [metastasis], etc.”

The researchers found that in from 40 to 60 percent of the six-to-eight cell microtissues assembled with a single abnormal cell—which made a little more of a permanently “on” growth protein—the abnormal cells either played the role of a pied piper, leading their normal neighbors to form moving h3>protrusions, or were extruded from the developing tissue.

Thus cellular heterogeneity has specific consequences for the inter-cellular ballet of morphogenesis that could be the start of either normal growth or early-stage malignancy.

“These behaviors that we’re seeing are two sides of one coin,” says Gartner. “One side being behaviors one associates with cancer, the other being the exact same behavior associated with development … Cancer, in many ways, is just development run amok. The tumor might be running developmental programs that are normally maintained in a dormant and inactive state in mature tissues.”

The methods: programming the self-assembly of human breast tissue

Studying what happens with the alteration of a single gene (and resulting activation of growth pathways) in a single cell in developing breast tissue required a combination of chemical biology, synthetic biology, and tissue engineering.

Gartner and his co-authors showed for the first time that human breast epithelial cells—cells that form the tightly-knit lining of the milk ducts—could be assembled into microscopic tissues made up of about six cells, including just one with an activated growth protein.

To do this, the scientists used 20-nucleotide segments of DNA strands as a sort of inter-cellular Velcro. Abnormal cells had their surfaces coated with one set of strands, and normal (wild-type) cells with complementary strands. Such strings of opposite bases readily stick together and precisely zip up.

To create microscopic tissues with a roughly 5:1 normal/abnormal ratio, normal cells were mixed together with abnormals in a 100:1 mix, ensuring that about five normal cells would stick to all sides of an abnormal one.

To confirm that their customized microtissues had the right mix of cells, the researchers genetically tweaked the abnormal cells to make fluorescent proteins that glow green under a microscope; normal cells made fluorescent red proteins. This allowed them to sort out the right red-and-green combinations and flush away cells that didn’t combine correctly.

Within 6 to 12 hours in a matrix with the consistency of Jell-O, these cellular aggregates replaced the matchmaking DNA strands with their own adhesion molecules. They organized themselves into coherent three-dimensional tissues that were microscopically similar in structure to the grape-like clusters they would have grown into over time in the body.

“These cells are not a perfect mimic of the mammary gland, but they’re one of the better, more reproducible systems out there,” says Gartner. “It allows you to get this glandular-like three-dimensional architecture.”

The research: turning up the volume on a key cellular switch

In their experiments, Gartner et al. used abnormal cells that produced an over-activated form of the protein Ras. The latter plays a key role in passing on growth signals from inside and outside the cell to other proteins that drive cell growth, proliferation, and movement (motility).

Normally, Ras switches “off” and requires additional growth signals to keep it active. But the altered genes in the abnormal cells expressed Ras that remains in a state of chronic activation.

“Instead of expressing 20 to 30 times more of this protein than you would have normally [thus yielding unambiguously cancerous cells], we’re only expressing approximately four-fold more—it just happens to be ‘on,’ ” Gartner explains.

“The important point is that these cells still have the capacity” to form relatively normal tissue, he says. “It’s just that they grow more quickly. The cells themselves are a little bigger. They move around a little faster,” during the cellular tissue assembly of morphogenesis.

This allowed the researchers “to analyze interactions between neighboring cells with subtle differences in Ras activation during the early stages of morphogenesis.”

As Gartner puts it, “We’re not blowing out the speakers. We’re just turning up the volume.”

Significantly, that growth “volume” in one cell is being “turned up” in a tissue undergoing change. Gartner notes similar studies have been done in growth-arrested mature tissues, but not in actively growing tissues where the cells need to coordinate their behaviors.

“Can we activate these pathways at levels that are consistent with what you would actually find in vivo? And can we do it in a community of cells that … are actually undergoing morphogenesis, a process that the mammary gland goes through again and again and again?”

“A tissue can do more than any individual cell can,” Gartner notes.

Via time-lapse videos of the first 24 hours of development of hundreds of microscopic breast tissues that were assembled with a single abnormally activated cell, researchers saw behaviors analogous to all those situations: 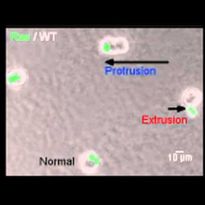 Such behaviors were rarely seen in similar tissues assembled from all abnormal activated Ras cells, or in tissues where all the cells were growth-primed abnormals combined with one non-activated breast epithelial cell.

“These observations suggest that cell-to-cell variability in the activation of these switches and pathways, at least in the context of development, is what causes these behaviors,” concludes Gartner.

The research also raises the question, Gartner notes, “If you take the same cells from the same dish, why do some of them extrude, some of them protrude?” Why the different behaviors emerge is the subject of ongoing study in his lab.

Both the protrusions led by activated Ras cells and the rare but statistically significant cases of fast-exiting abnormal cells could fit with the emerging view among some researchers that the spread of cancer cells “is actually something that occurs pretty early … before you can detect the tumor,” says Gartner.

“You can actually see the signature of that, in this case by putting a cell with the subtlest transformation into a group of wild-type cells.”

“What we’re seeing is that if the context is appropriate, meaning the tissue’s growing or maybe it’s inflamed … then the mutant cell could potentially just leave the tissue right then and there. In other words, the very earliest event in cancer initiation, the activation of an oncogene, could coincide with that cell’s dissemination.”

“The implication for the initiation of breast cancer, or any cancer, is that most people believe that mutations that occur in cancer cells don’t occur spontaneously to every cell in a tissue. It happens in one cell. That cell needs to get out of the tissue to proliferate. So how that occurs is important.”